Given the sheer volume of unfolding news of late, it’s certainly understandable if you have real concerns: Is a recession coming? What happens in a recession? Are similar mishaps heading our way? What could be coming next?

No matter how you feel about any or all of these issues, you may be thinking twice about your investments. Should you try to shift your portfolio to higher ground, until the coast seems clear? Might these stressful times justify a measure of market-timing?

If you know us well, it won’t surprise you that we’re against the idea, regardless of how the coming weeks and months unfold. Market-timing may offer brief relief, but it ultimately runs counter to your best strategies for building durable, long-term wealth.

So, despite unsettling breaking news, we still suggest your best course is to grit your teeth, and stick with your carefully structured investment portfolio. Or, if you haven’t yet got one, why not make it a priority to establish one, ASAP?

The Perils of Market-Timing, Even During Recessions

Here are four important reminders on the perils of trying to time the market. These apply even when upside-down yield curves, looming recessions, geopolitical strife, and any other media-whipped cataclysmic prophesies are on the rise. In fact, they especially apply during just these sorts of uncertain times.

DOWNLOAD THIS FREE RESOURCE: 7 Reasons why you need an Evidence-Based Strategy to achieve your financial goals.

Outguessing markets is more difficult than you’d think. While it’s theoretically possible to get in and out at just the right times, there isn’t much evidence it can be done reliably – not even by professional investors. After all, if it could be consistently done, the “star” performers who have managed to do so wouldn’t be so few and far between.

Market Volatility Is Nothing New Even with an Impending Recession

Before you react to any current market uncertainty, it also may help to remember that market volatility isn’t new, and can come from many sources. Exhibit 1 shows calendar-year returns for the U.S. stock market since 1979, as well as the largest intra-year declines that occurred each year. During this period, the average intra-year decline was about 14%. About half of the years observed had declines of more than 10%, and around a third had declines of more than 15%.

And yet, despite all that intra-year drama, 80% of those years (33 out of 40) delivered positive annual returns for those who simply sat tight and waited for the storms to pass. This goes to show us just how common temporary market declines are, and how hard it is to predict whether even a large intra-year decline will lead to negative annual returns. 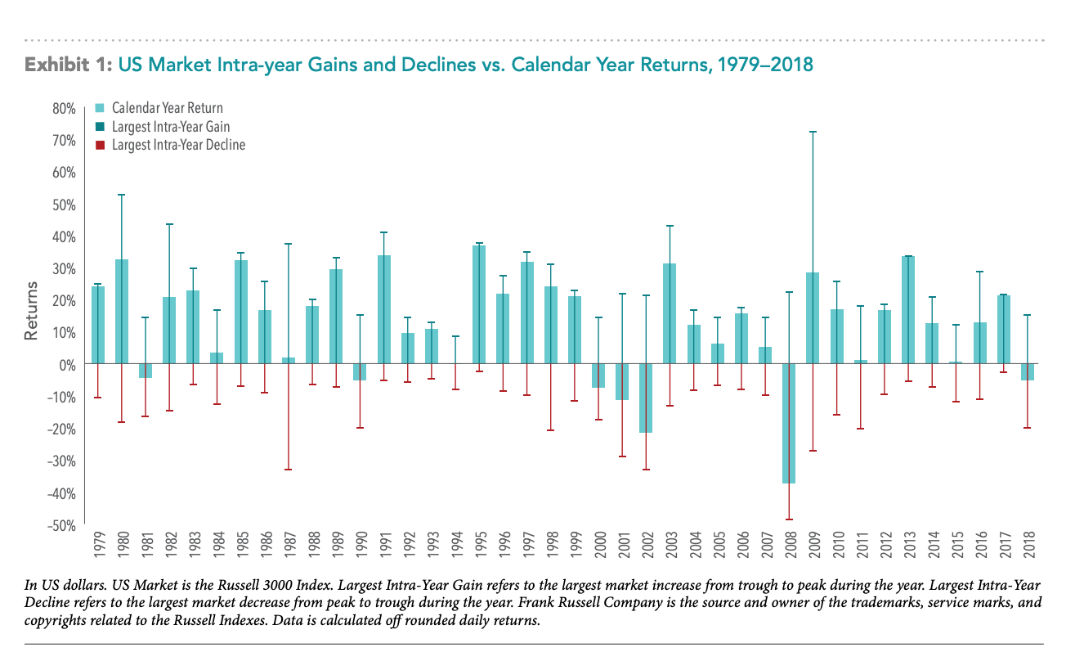 The illustration above is only considering a year’s worth of patience. Trying to time the market to dodge these dips can also do considerable damage to your cumulative performance, for at least a couple reasons: 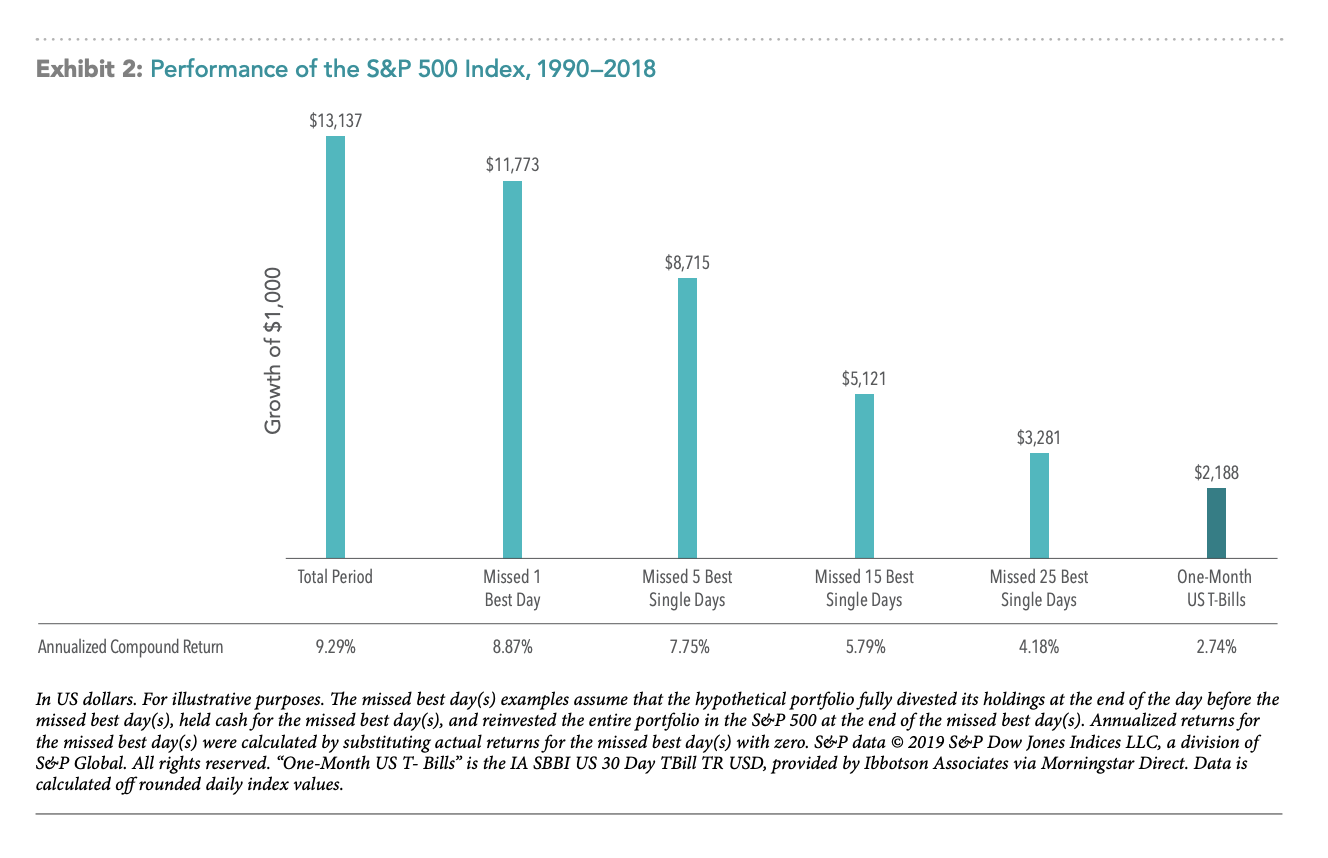 To illustrate, Exhibit 2, shows the impact of missing out on just a few days of strong returns. The bar on the left shows the hypothetical growth of $1,000, based on the annualized compound return of the S&P 500 Index going back to 1990. Subsequent bars show what would have happened if you missed the best day, or the best 5, 15 or 25 days during the same period. Being on the sidelines for only a few of the market’s best days resulted in substantially lower returns than the total period had to offer.

The Bigger They Are …?

Another concern we often see comes from investors who assume, the bigger the market grows, the harder it’s about to fall. Given the most recent decade-plus run of strong market performance, it may feel as if a downturn is imminent. And it may be. We have little doubt we’ll eventually encounter another rough patch.

But how soon? That’s unclear. A surging market and new index highs do not necessarily portend a rapid fall. Let’s revisit that brief market plunge at year-end 2018. Had you feared the worst and gotten out then, you might still be sitting on the sidelines, wondering when to get back in. Rather than saving yourself from a downturn, you would have missed out on quite a bit of growth.

The Glass Is More Than Half Full

Bottom line and over time, the markets have ultimately delivered more gains than losses. As we can see in Exhibit 3, a dollar invested in the world markets in 1970 is now worth more than $50, despite many drops along the way. If the losses had exceeded the gains, this chart would look very different.

This isn’t the only evidence that investors should expect more market growth than decline over time. Exhibit 4, below, illustrates the historical performance of the S&P 500 Index, highlighting periods when the market was rising and falling.

S&P 500 Index total returns in USD, January 1926 - December 2017. Bear markets are defined as peak-to-trough downturns of 10% or more from new index highs, while bull markets are rises from the trough through the next new index high.

We can see from this chart that the blue-colored good times for the market have been disproportionately longer than the red-colored bad times. With bull runs ranging in duration from as short as five months to as long as nearly 14 years, we can also see that the length of the run tells us nothing about when the next downturn may arrive.

Cogent Advice on Financial Advice When Talking about Looming Recessions

The evidence is piling up on why staying the course is your best course in volatile markets. News anchors, financial talking heads, friends, neighbors, acquaintances … If you don’t have a strong investment philosophy to ground you, it’s too easy to be knocked off-course. Every time you hear some new opinion about what to make of the most recent yield curve, or whether a recession is near or far, it leaves you wondering anew what to do next.

We’d like to think one of the most important reasons you hire a financial advisor is to help you avoid just these sorts of market-timing perils – during just these sorts of tempting times. Showing you how to stick with a well-crafted plan based on your goals offers you your best odds in an uncertain world.

Life is uncertain. The market is even more precarious. This means building wealth has no shortcuts. Success requires a solid investment approach, a long-term perspective, and discipline to stay the course. Instead of leaving your financial future to chance, you need to have a plan. Cogent Strategic Wealth is here for you.

So, instead of worrying about your future, why not take positive steps to protect it? Set up a Cogent Conversation with us today. We’ll show you how to transform your hard work into durable wealth.