2022 has been a tough and confusing year for investors. If you’ve been thinking about getting out of the market until things look “safer,” I cannot overstate how normal and even fundamental that is. You almost wouldn't be human if you didn't at least feel, if not act on the impulse to tinker with your investment machinery at some point in your career.

So, go ahead, let the feelings play out. Too many repressed emotions are the stuff true crime stories are made of. But then, let’s talk about why and how to get back on course. Because, as legendary investor Peter Lynch reportedly observed sometime back in the 1990s:

At the time, Lynch’s name was nearly as familiar as Elon Musk’s is today—at least in the financial circles I frequented. Wrapping up his run as Fidelity’s Magellan® fund manager, he’d been beating the pants off the market for years.

These days, Lynch seems to be quietly enjoying his life as a wealthy philanthropist, but his words of wisdom remain as loud and clear as ever: Preparing for, reacting to, or freaking out about short-term market volatility is a perennially losing proposition.

“Being surprised at equities’ ups and downs is like visiting Chicago in January and being shocked by 8 inches of snowfall.”

Up and down markets have certainly come and gone since the 1990s, even as the market has continued to climb generally upward. 2022 has been a particularly wild ride, leaving many investors guessing which way to turn. After experiencing its worst first two quarters since the 1970s the S&P 500 Index shot back up in July, posting its best month since 2020. Go figure.

Zooming out longer term, we can view the data for 96 calendar years of U.S. investment returns from 1927—2021. Across that time, the US Stock Market has experienced an average annual return of nearly 10%.

How can we be more like Peter Lynch? In a word, we need time: By avoiding the temptation to engage in market timing—jumping in and out during the constant corrections—you grant your investment portfolio the space and time it needs to grow over the long haul.

To reinforce this concept, consider this fun, three-question quiz:

2. If we remove the returns from its best-performing week during that quarter century, what would the end results be instead?

3. If we remove the returns from its best-performing quarter, what would the end results be?

The answers, which we’ll share below, reveal what many investors forget when the you-know-what is hitting the fan:

Most stock returns come in short and unpredictable bursts, often just when we’re bracing for the worst. This makes market-timing an illogical pursuit.

No wonder Charles Ellis offered this advice in his classic book, “Investment Policy”:

“Investors would do well to learn from deer hunters and fishermen who know the importance of ‘being there’ and using patient persistence—so they are there when opportunity knocks.”

What Does Warren Buffett Say?

“Our stay-put behavior reflects our view that the stock market serves as a relocation center at which money is moved from the active to the patient.”

“Inactivity strikes us as intelligent behavior.”

“Productive assets such as farms, real estate and, yes, business ownership produce wealth – lots of it. Most owners of such properties will be rewarded. All that’s required is the passage of time, an inner calm, ample diversification and a minimization of transactions and fees.”

The Answers to the Quiz 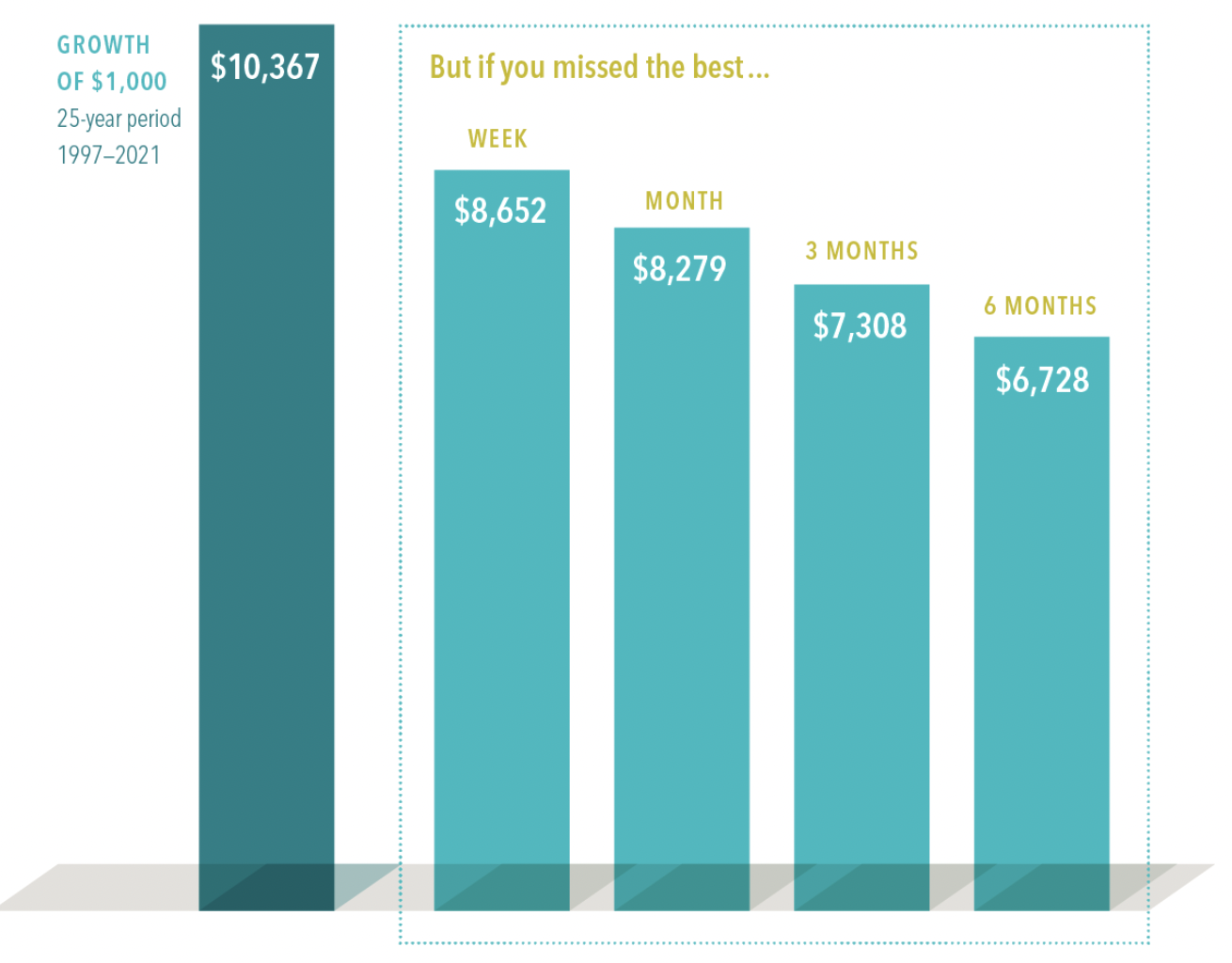 Amateurs and Pros Are Equally Bad at Prediction

Despite the evidence on the damaging effects of market-timing, far too many investors succumb to the temptation anyway. Not just individual investors, mind you. Professional fund managers are no better at making market predictions. For example, in “A Random Walk Down Wall Street,” Burton Malkiel cited a Goldman Sachs study that examined mutual funds’ cash holdings from 1970–1989.

Malkiel’s analysis is from some time ago, but recent observations continue to reach similar conclusions. For example, Morningstar’s 2021 “Mind the Gap” analysis found, once again, individual investors had underperformed the same funds they held by about 1.7 percentage points over the 10 years ending December 31, 2020. Morningstar concluded:

“This shortfall, or ‘gap,’ stems from inopportunely timed purchases and sales of fund shares, which cost investors nearly one sixth the return they would have earned if they had simply bought and held.”

In short, investors and fund managers alike who continue to try timing the market, continue to fall short compared to simply buying and holding broad swaths of the market over time. We would suggest heeding this evidence—as well as advice from investment legends such as Ellis, Buffett and Lynch—whenever you hear warnings from “gurus” that a market correction is nigh. Even if they’re correct, it should be irrelevant to your investing.

This wisdom is especially relevant with the Shiller CAPE 10 hovering around 31 as I write this, almost double its long-term average. However, I would note that calls for a correction are nothing new. Throughout time, it’s rarely difficult to find an assortment of talking heads who are well known for predicting a correction is about to crash the party … over and over again.

For example, Jeremy Grantham is one such market strategist known for his gloomy predictions. In February 2021, Grantham once again declared we were in an “epic bubble,” and made comments such as: “I suspect selling everything would work out just fine.”

Yikes. We now know in hindsight investors would have missed out on some pretty exciting returns had they acted on Grantham’s advice. As reported by The Wall Street Journal , low rates and busy investors “helped the S&P 500 close at a record 70 times this year, more than one-quarter of all trading days … and pushed the index up 27% in 2021.”

Applying similar logic, we would suggest there’s also an opportunity cost incurred if you wait to buy into the market, fearing that valuations are too high. Rather than try to time either entering or exiting the market, recall Buffett’s words from above on the market’s remarkable ability to persistently convert the world’s productive enterprises into long-term returns. From this perspective, there’s no better day than today to begin participating in this growth (commensurate with your risk tolerances).

Again, it’s only natural to wonder whether you’re still on course when the markets are sending out all sorts of mixed singles in the near-term. That’s why, whether you’re thinking of exiting the market or you’ve already done so, your next action should be to GET A PLAN, or revisit the one you’ve got. Your plan can start with this review: 2 Approaches to Get Back in the Market if You've Been Out. If you otherwise remain wandering in a financial desert of uncertainty, you’ll lose sight of why you’re investing in equities to begin with (so your cash won’t lose ground to inflation over time), and you’ll never reach your true destination, such as retirement.

Put another way, the risk during chaotic (or any) times isn’t that you’ll end up participating in the next 25% (or whatever) decline. The real risk is missing out on the next 100% advance. This cannot be timed, but it’s nearly inevitable.

Instead of waiting for some downside target, such as the S&P 500 dropping to 3,200, remember the downside dips occasionally occur, but sooner or later, we’re almost certain to see 6,200, and then 9,200, and so on. Build this confidence into your decision process, and perhaps it will be easier to get back into the market, and sleep a little sounder along the way.

From his days as editor of Journal of Portfolio Management, financial author Peter Bernstein provides us with yet another timeless insight:

“Even the most brilliant of mathematical geniuses will never be able to tell us what the future holds. In the end, what matters is the quality of our decisions in the face of uncertainty.”

We certainly live in uncertain times. But that’s always the case. And remember, the market already reflects whatever concerns we may have, because, collectively, we are the market. Ignore the inevitable corrections. Focus instead on the market’s ability to generate future expected returns out of the perennially messy present.

Life is uncertain. The market is even more precarious. This means building wealth has no shortcuts. Success requires a solid investment approach, a long-term perspective, and discipline to stay the course. Instead of leaving your financial future to chance, you need to have a plan, even a short-term one to get through the chaos.

Do you have confidence you are taking the right steps during the current volatility and uncertainty?

We are good at helping successful high achievers, like you. Take us up on our offer of our Second Opinion Service.

So, instead of worrying about your future, why not take positive steps to protect it? Set up a Cogent Conversation with us today. We’ll show you how to transform your hard work into durable wealth. And you won't need to say more money has been lost waiting for corrections than in them for me.

The opinions expressed by featured authors are their own and may not accurately reflect those of Cogent Strategic Wealth®. This article is for general information only and is not intended to serve as specific financial, accounting or tax advice. By clicking on any of the links above, you acknowledge that they are solely for your convenience, and do not necessarily imply any affiliations, sponsorships, endorsements or representations whatsoever by us regarding third-party Web sites. We are not responsible for the content, availability or privacy policies of these sites, and shall not be responsible or liable for any information, opinions, advice, products or services available on or through them.