To say that “money isn’t everything” is more than a cliché. Studies in the early 1970s demonstrated that a sense of well-being, or happiness, had not increased commensurately with income over the previous half century.1

That trend continues as the modern world has arguably made well being more elusive than ever. Fortunately, positive psychology arose in the 1990s, attempting to find the key to understanding what makes people flourish. It has spawned the so-called happiness literature that seeks modern truth by weaving together science and ancient wisdom. How to be happier is now the most popular course at Harvard and Yale.2

Business people and entrepreneurs are also contemplating some of these age-old questions. Mo Gawdat, a serial entrepreneur and Chief Business Officer at Google X, tried to engineer a path to joy in his book, Solve for Happy, by expressing happiness as an equation.

According to Gawdat’s model, if you perceive events as equal to or greater than your expectations, then you’re happy—or at least not unhappy.

Investors wanting to increase their wealth and well-being should consider his model. You can’t control many events that affect your portfolio, but events themselves are not part of the equation. Fortunately, you have some control over the two variables driving happiness—your perception of the events and your expectations.

First, let’s review some fundamentals about expectations in the financial markets.

If it is widely known that stocks are riskier, prices should reflect that information, and, for the market to clear, investors are 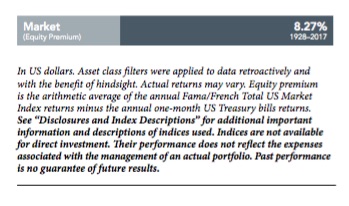 2. All stocks don’t have the same expected return.

The price of a good and service is set by market forces and results from many inputs, such as the costs of raw materials, labor, shipping, and advertising, as well as competition and perceived value. As a consumer, you don’t need to understand all the inputs to make an informed purchase. You look at the price relative to alternatives in the market and ask if the product is worth the price—and the lower the price or the more you get, either in quality or quantity, the better the purchase. 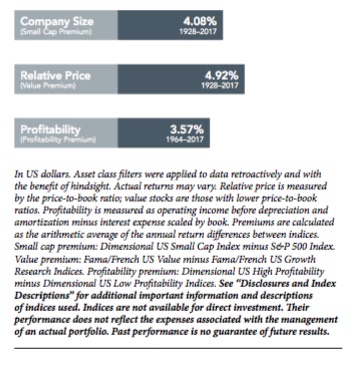 Similarly, a stock’s price has many inputs. Expectations about future profits, different types of risk, and investor preferences are just a few examples, but you don’t need a model to understand all those inputs or how they impact market prices. All available information should already be reflected in the price, which tells you something about expected returns. Whether you are a consumer or an investor, you want to pay less and receive more.

Therefore, expected returns are a function of the price you pay and cash flows you expect to receive. Companies that are smaller and more profitable, with lower relative prices, have higher expected returns than those that are larger and less profitable, with high relative prices. These patterns are referred to as size, profitability, and value premiums. They have historically ranged from slightly more than 3.5% to just under 5% in the US.

3. Expected premiums are positive but not guaranteed.

Although expected premiums are always positive, realized premiums may be positive in some years and negative in others. You may even experience a negative premium for several years in a row. Exhibit 1illustrates that the probability of a positive small cap premium over one year is only slightly more than a coin flip, and it is roughly 65% for the equity premium.

The probability of earning a positive premium also increases with your time horizon, but it isn’t a sure thing since underperformance is possible over any time frame. Nobel laureate Paul Samuelson said, “In competitive markets there is a buyer for every seller. If one could be sure that a price will rise, it would have already risen.” 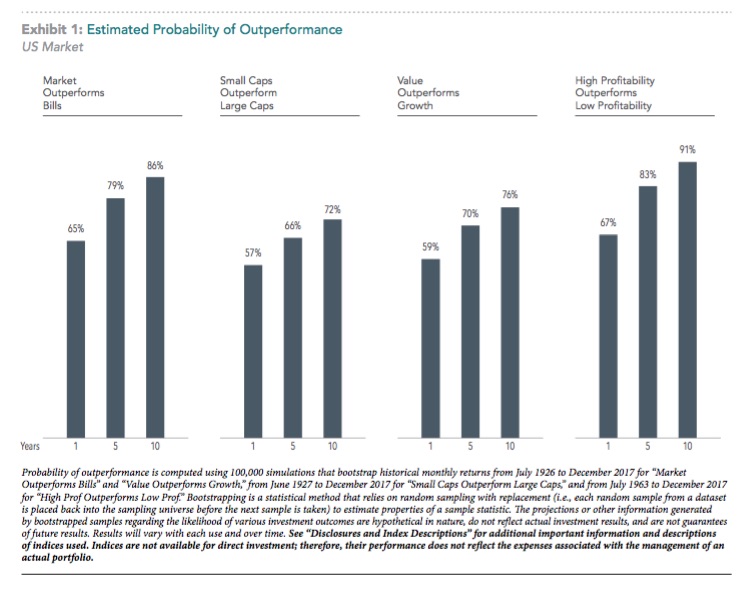 The other half of the equation is your perception of an event.

Consider an event, such as realizing a negative premium over 10 years, a time frame that some investors consider long term. This is not just a hypothetical exercise, because, as shown in Exhibit 2, the cumulative value premium has been negative for the past 10 years in the US, while the market and size premiums were negative in the 10-year periods ending in 2009 and 1999, respectively. 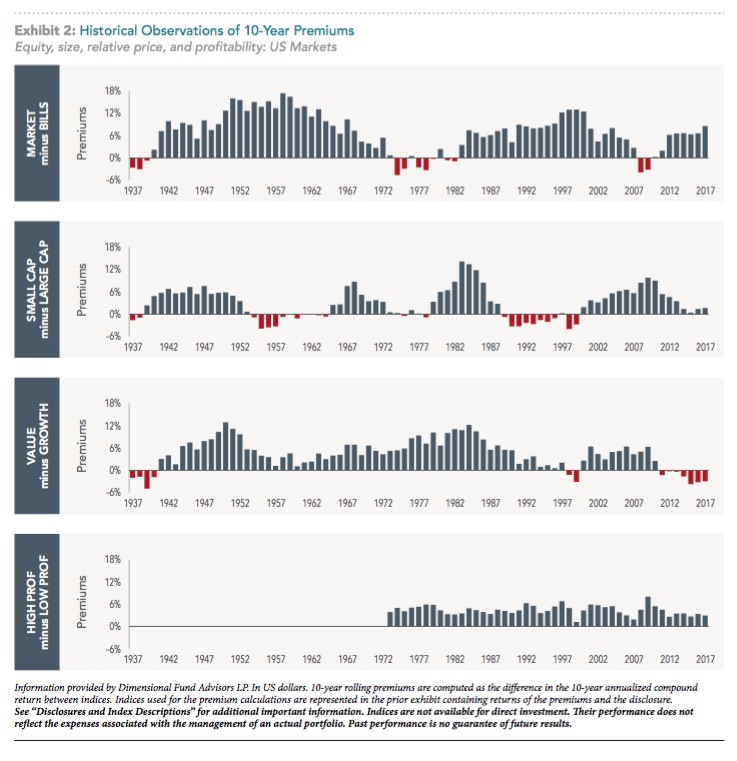 Lengthy periods of underperformance are disappointing, as investors obviously prefer higher rather than lower returns. Nonetheless, disappointment shouldn’t turn into anger or regret if you know in advance that periods like these will occur and recognize you can’t predict them.

Ancient wisdom teaches acceptance, as resistance often fuels anxiety. Instead of resisting periods of underperformance, which might cause you to abandon a well-designed investment plan, try to lean into the outcome. Embrace it by considering that if positive premiums were absolutely certain, even over periods of 10 years or longer, you shouldn’t expect those premiums to materialize going forward. Why is this? Because in a well-functioning capital market, competition would drive down expected returns to the levels of other low-risk investments, such as short-term Treasury bills. Risk and return are related.

The good news is there are sensible and empirically sound ways to increase expected returns. The bad news is there will be periods of underperformance along the way.

Your happiness as an investor depends on how your perception of events stack up against your expectations. Proper expectations alongside the appropriate perception can help you stay the course and may improve your wealth and well-being.

As David Booth, Executive Chairman and founder of Dimensional, says, “The most important thing about an investment philosophy is having one you can stick with.”

This article was written by Brad Steiman Dimensional Fund Advisors.

CONTACT US TO HELP YOU FIND YOUR HAPPINESS EQUATION

1. In his seminal article, Easterlin (1974) saw that while industrialized countries had experienced phenomenal economic growth over the past 50 years, there had been no corresponding rise in the happiness of their citizens. Easterlin, Richard A. “Does Economic Growth Improve the Human Lot? Some Empirical Evidence,” University of Pennsylvania, 1974.