“If three or five years of returns are going to change your mind [on an investment], you shouldn’t have been there to begin with.”

If I had to choose one lesson from all that the markets taught us in 2016, Professor Fama’s sentiment above just about says it all. To see why, check out Dimensional Fund Advisors’ 2016 Market Review, which we are pleased to share with you today.

This is now our fourth year – and counting – of posting Dimensional’s annual market reviews. If you want to take the grand tour, here are the rest of them for your reading pleasure:

As Professor Fama suggests, a few years of market performance do not tell us anything about what is going to happen during the next few years. The information is by no means intended to be used as a resource for trying to time your positions in the market.

But the more of these insightful annual reviews we accumulate, the more clear it becomes why this is so. Consider this year’s January 2017 climate, compared with January 2016, when the markets were in a much gloomier state amidst a panic-driven sell-off.

2016 was historic. Remember, the first week went down in history as the worst-ever opening week for the Dow. Yes, theworst – falling 6% in the first 5 days. By mid-February, it was down 10%. Ouch!

Markets calmed by mid-summer, then Brexit shook Europe, and the world. The Dow again dropped precipitously – 5% in 2 days. Many pundits said markets would continue to fall, but instead, they recovered within a week.

Next came the uncertainty around the Presidential election results and more market volatility. Again, many offered market predictions; many were proven dead wrong.

We say bravo if you tuned out the noise and stuck to your long-term financial plan throughout 2016. Let the pessimists who may have sold at market lows receive their punishment. Lesson learned: Other than looking back on them for a laugh, the media and “experts” who make political and financial predictions are best ignored by serious investors.

While 2015 and early-2016 performance had been marred by nearly universal negative-to-low returns, especially from small-cap and value stocks, 2016 annual returns were unpredictably about as polar opposite as returns can get. To highlight one observation from Dimensional’s larger report:

“Over 2016, the US small cap premium marked the seventh highest annual return difference since 1979 when measured by the Russell 2000 Index minus Russell 1000 Index. Most of the performance for small caps came in the last two months of the year, after the US election on November 8. This illustrates the difficulty of trying to time premiums and the benefit of maintaining consistent exposure.”

Enjoy the rest of this year’s report for additional insights into how – and why – to stay the course in pursuit of the market’s long-term expected returns. We wish you the very best for a healthy and happy 2017, and know that we’re here to help.

In 2016, the US market reached new highs and stocks in a majority of developed and emerging market countries delivered positive returns. The year began with anxiety over China’s stock market and economy, falling oil prices, a potential US recession, and negative interest rates in Japan. US equity markets were in steep decline and had the worst start of any year on record. The markets began improving in mid-February through midyear. Investors also faced uncertainty from the Brexit vote in June and the US election in November.

Many investors may not have expected global stocks and bonds to deliver positive returns in such a tumultuous year. This turnaround story highlights the importance of diversifying across asset groups and regional markets, as well as staying disciplined despite uncertainty. Although not all asset classes had positive returns, a globally diversified, cap-weighted portfolio logged attractive returns in 2016.

Consider that global markets are incredible information-processing machines that incorporate news and expectations into prices. Investors are well served by staying the course with an asset allocation that reflects their needs, risk preferences, and objectives. This can help investors weather uncertainty in all of its forms. The following quote by Eugene Fama describes this view.

“If three or five years of returns are going to change your mind [on an investment], you shouldn’t have been there to begin with.” ―Eugene Fama

The chart above highlights some of the year’s prominent headlines in context of broad US market performance, measured by the Russell 3000 Index. These headlines are not offered to explain market returns. Instead, they serve as a reminder that investors should view daily events from a long-term perspective and avoid making investment decisions based solely on the news.

The chart below offers a snapshot of non-US stock market performance (developed and emerging markets), measured by the MSCI All Country World ex USA Index (in USD, net dividends). The headlines should not be viewed as determinants of the market’s direction but as examples of events that may have tested investor discipline during the year. 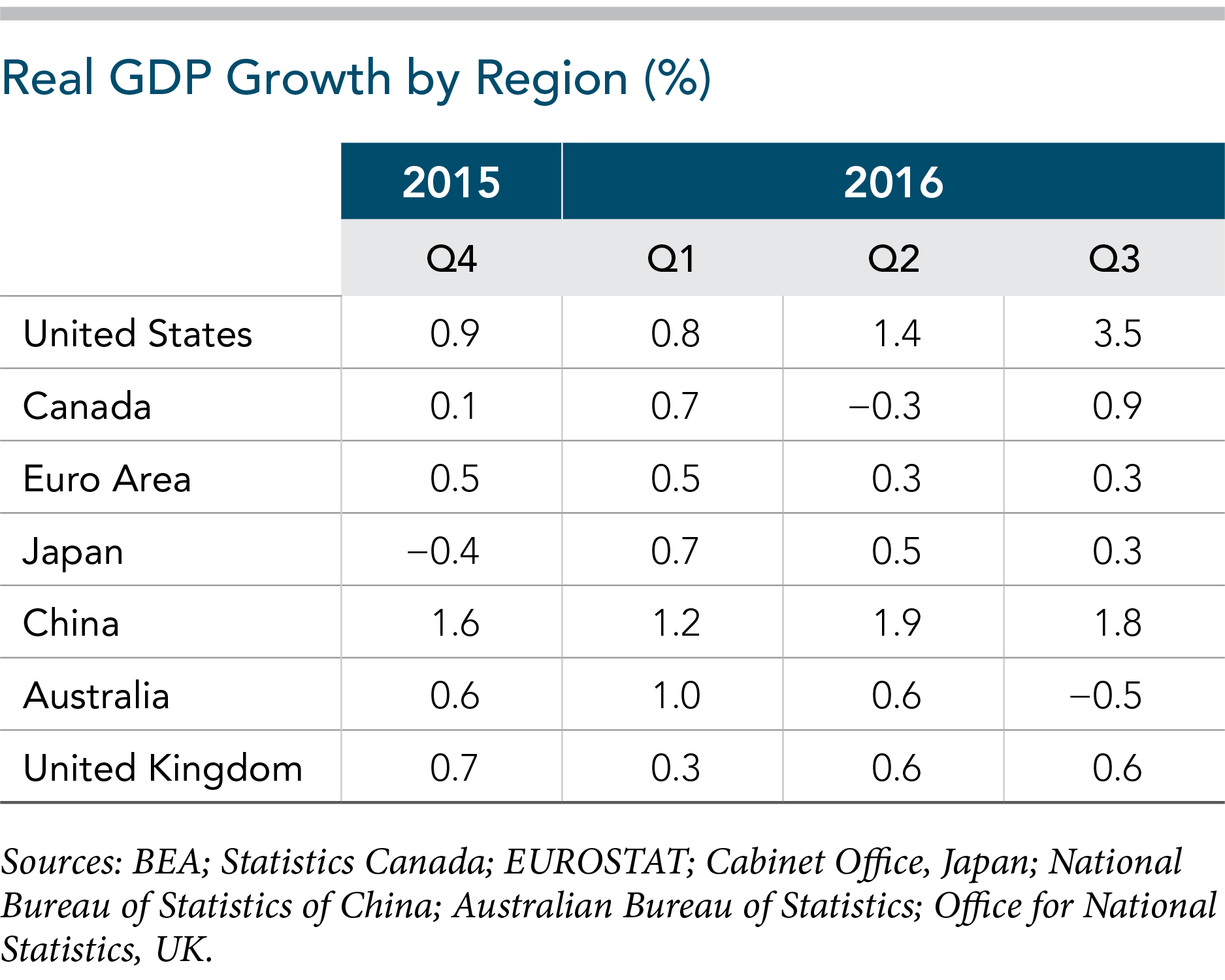 Overall, US equities outperformed equities in the developed ex US markets and emerging markets. As a result, a market cap-weighted global equity portfolio would have underperformed a US equity portfolio. Investors generally benefited from emphasizing value stocks around the world, as well as US small cap stocks.

Strong performance in the US placed it as the 17th best performing country out of the 46 countries in the MSCI All Country World Index (ACWI), which represents both developed and emerging markets. Although the S&P 500 Index had a positive return in 2016, the year was not in the top half of the index’s historical annual returns.

Brazil offers a noteworthy example of market prices at work and the difficulty of trying to forecast and time markets. Despite a severe recession, Brazil was the top performing emerging market country in 2016. Brazil’s GDP was projected to shrink 3.4% in 2016, according to the OECD in November, yet its equity market logged strong performance. The lesson is that prices incorporate a rich set of information, including expectations about the future. One must beat the aggregate wisdom of market participants in order to identify mispricing. The evidence suggests that this is a very difficult task to do consistently.

In 2016, equity market volatility, as measured by the CBOE Volatility Index (VIX), was below average. There were, however, several spikes—as you might expect—as new information was incorporated into prices. The high was reached in early February, and spikes occurred following the Brexit vote in June and again in November preceding the US election.

In 2016, the small cap and value premiums were mostly positive across US, developed ex US, and emerging markets, while the profitability premium varied by market segment. Though 2016 marked a generally positive year, investors may still be wary following several years of underperformance for value and small cap stocks. Taking a longer-term perspective, the premiums remain persistent over decades and around the globe despite recent years’ headwinds. The small cap and value premiums are well-grounded in financial economics and verified using market data spanning decades, but pursuing those premiums requires a consistent, long-term approach.

In the US market, small cap stocks outperformed large cap stocks and value stocks outperformed growth stocks. High profitability stocks outperformed low profitability stocks in most market segments.Over 2016, the US small cap premium marked the seventh highest annual return difference since 1979 when measured by the Russell 2000 Index minus Russell 1000 Index. Most of the performance for small caps came in the last two months of the year, after the US election on November 8. This illustrates the difficulty of trying to time premiums and the benefit of maintaining consistent exposure. Through October, US small cap stocks had outpaced large company stocks for the year by only 0.35%. By year-end, the small cap premium had increased to 9.25%, as shown below. 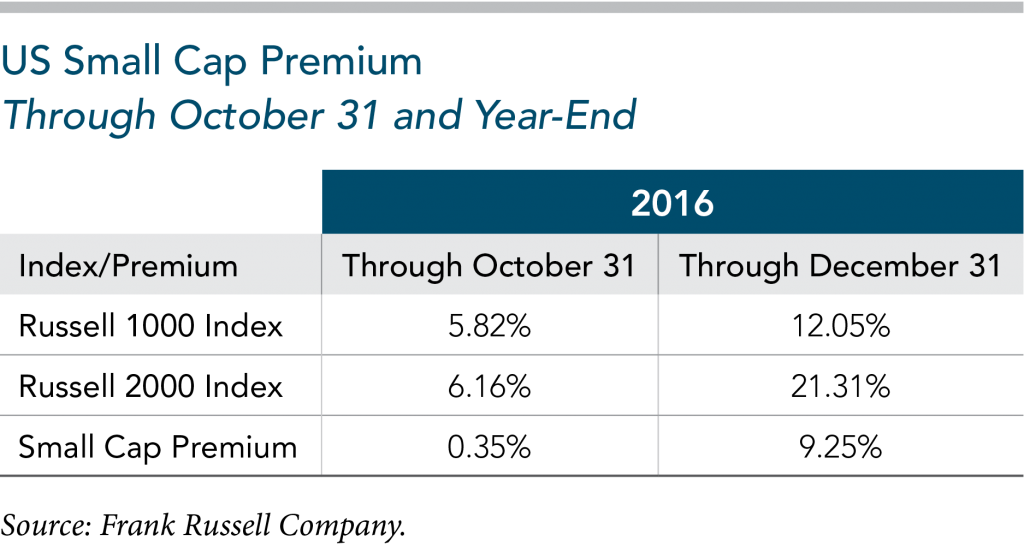 US value stocks outperformed growth stocks by 11.01% following an extended period of underperformance. Over the five-year rolling period, the value premium, as measured by the Russell 3000 Value Index minus Russell 3000 Growth Index, moved from negative in 2015 to positive in 2016.

In developed ex US markets, small cap stocks outperformed large cap stocks and value stocks outperformed growth stocks. Over both the five- and 10-year rolling periods, the small cap premium, measured as the MSCI World ex USA Small Cap Index minus the MSCI World ex USA Index, continued to be positive. The five- and 10-year rolling periods for the small cap premium have been positive for the better part of the past decade.

Value stocks outperformed growth stocks by 9.26%, as measured by the MSCI World ex USA Value Index minus the MSCI World ex USA Growth Index. Similarly to US small caps, most of the outperformance occurred in the fourth quarter, reinforcing the importance of consistency in pursuing premiums. Despite a positive year, the value premium remains negative over the five- and 10-year rolling periods.

While interest rates increased in the US, they generally decreased globally. Major markets such as Japan, Germany, and the United Kingdom all experienced decreases in interest rates. In fact, yields on Japanese and German government bonds with maturities as long as eight years finished the year in negative territory.

The British pound, euro, and Australian dollar declined relative to the US dollar, while the Canadian dollar and Japanese yen appreciated relative to the US dollar. The impact of regional currency differences on returns in the developed equity markets was minor in most cases. US investors in both developed and emerging markets generally benefited from exposure to certain currencies.

“There’s no information in past returns of three to five years. That’s just noise. It really takes very long periods of time, and it takes a lot of stick-to-it-iveness. You have to really decide what your strategy is based on—long periods of returns—and then stick to it.”